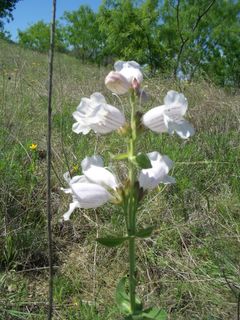 I've walked the trails several times lately, and this is the one and only one of these I've seen.

In other news, I was chatting with my friend the other day about how our kids went off to Christian colleges but didn't get engaged while there. We want our money back! We had a laugh as we came to the conclusion that she shouldn't have sent her son to LeTourneau, but I should have sent my daughter there! (Just kidding, in case any of the characters in this story are reading this ;-)

We had a nice chat with Andrew today. He arrived safely in Charlotte last night and was able to get a full night of sleep. It was nice to be able to talk leisurely for a change, since phone calls to Ethiopia are pretty expensive.
Posted by Thainamu at 8:34 PM No comments:

Andrew just sent an email from Amsterdam. Wow, they just don't make overseas travel like they used to. From Amsterdam he sent me a spreadsheet I needed that got clobbered when my computer died. Amazing. He had a long layover there, but he said it was too cold and rainy to go out and look around. He will have other chances.

Remember all that work Rachel went through to get her fingerprints made? Turns out the police in Bethany didn't do a very good job with her little fingers and smudged all the prints. So now she has to go to the main police station in Oklahoma City and do it again. Not something she has time for in her last hectic weeks of school, but she did find someone willing to take her there next week.
Posted by Thainamu at 8:11 AM No comments:

I spent a lot of today getting my new computer organized: installing MS Office, configuring my web browsers, installing a fancy mouse, installing the photo software, finding all my old bookmarks, installing my backup of My Documents. It all went pretty well except for one problem: I had about 15 current Juno messages (from this past week) that got clobbered when I installed the old mailbox. And I may have lost a handful of recent additions to my Juno mailbox. But, it could have been worse.

I like the screen on this laptop, so I'm not even going to use the outboard monitor, but I am using an outboard keyboard and mouse. The printer is working, as is my digital camera downloads; I haven't tried the scanner yet.

In other news: David tells me he will soon be interviewed by the father of a certain Miss Someone; Rachel has not had an easy week with solo student teaching, but she is coping pretty well; Andrew is in an airplane on his way from Addis Ababa to Charlotte, NC.

Pray for them with me, if God brings them to mind.
Posted by Thainamu at 4:51 PM No comments:

At 7pm I got a phone call from the nice man at the computer services department. He had stayed late to get my newest old computer running. Wasn't that nice of him? So I went over right then and picked it up. He did a great job getting it working properly, and now I'm spending the hours to install the software I want. Next job is to get it working on our home network and then download my backup from Gary's computer. It will no doubt take me a few days to get configured like I want, but it is nice to have a "new" machine. It is a Toshiba laptop with a large clear screen, and it seems to be faster than my last two machines.
Posted by Thainamu at 10:36 PM No comments:

No, I don't really mean I'm praying for my computer, though maybe if I had, it wouldn't have died. I just have two things to talk about today--my computers and prayer.

A few days ago my computer died. It was Rachel's old computer, 5 years old, so I guess it was about time to die. The bad news--I hadn't backed it up the day before. The good news--I had backed it up a week ago.

So then I moved to a Compaq laptop, which I'm using as I type this blog. This computer was also given to me, and is so old it doesn't have a USB connector. But it doesn't reboot itself, so at least it works. The strange thing about this computer is that it has some kind of nanny software on it, and there is a list of words it won't let me type. Well, I can type them, it just won't display them. This feature works equally well whether I'm using IE or Firefox, and I can't discover what program is running to cause it.

So now I'm trying to get hand-me-down computer #3 working. This one is a Toshiba laptop with a nice big screen. Still not a very new machine, but at least it has a couple USB connectors on it. We tried to install the OS and just had so many problems that we decided to ask for help. So today I just took it over the the nice guys at the Center computer services, and they seemed to think in about 24 hours they could have it working for me. It was pleasant to have them smile at me and say, "Sure, I can do that for you." So, maybe in a day or two I'll see if I have a "new" computer. Then I'll see if I can install my backups.

Now to the prayer topic. Today the whole center was supposed to spend 9am-noon in prayer. I had one assignment I had to turn in by noon, so I hurried and got that finished, then went to the meeting room where the prayer meeting was being held. It seemed hot and stuffy in there, and the weather outside is beautiful today (after yesterday's tornado warning and hail storm). So I decided I would do my praying by myself as I walked. There are some cool hiking trails behind our center, and the weather was nice, and the birds were singing, and the flowers were flowering,... I just couldn't bear to be cooped up.

And I did pray, or at least I tried to, but God kept interrupting me. First there were the flowers--how many of them did he put on that trail? Such a variety, and so much fun to try to identify. Then there were the bird conversations that I couldn't help but overhear. Honestly, birds do talk back and forth, repeatedly, to each other, first on the left, then on the right. Then there were the bugs who were mating, but I won't go into that. How did God expect me to concentrate on praying when there were so many beautiful things in His creation to take in?
Posted by Thainamu at 3:00 PM No comments: