When I first started blogging I thought it was so cool to get comments on my posts. It felt like someone actually was acknowledging me as a person, and a person they cared enough about to converse with. Or, if not that, at least acknowledging I'd said some something worthwhile, or funny, or .... I kind of gave up on that idea by rereading the tag line on my blog and reminding myself that I'm just talking to myself, so if I want comments, I should just leave comments for myself.

I was talking to someone else about comments on blogs. She felt sad that no one commented on her blog. I then asked her, "Well, how often do you comment on the blogs of others?"

Then there are the people, usually my age or older, who think if they leave a comment someone will steal their identity and they'll end up in the poor house due to credit card fraud.

Over the two plus years I've been blogging, I've had a number of comments deleted that I've put on other people's blogs. I can think of about five or six times this has happened. Only once did the person explain to me in an email why they deleted my comments. I suppose if I were to express a touch of cynicism inside of me, I'd say people mostly want flattering or sympathetic comments, your basic feel-good stuff. I guess if I'm going to play the commenting game, I'd better brush up on my interpersonal skills.
Posted by Thainamu at 10:05 AM 6 comments: 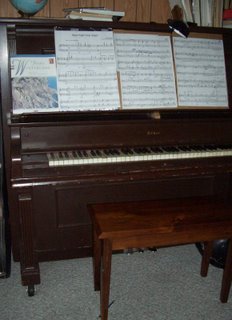 Gary really likes this CD of Christmas music. He's been trying to copy the lovely version of Silent Night from the CD for a couple years now. And he could probably do so if it were just in the key of C. No, this song is written with 6 flats! So in order to learn it he had to get the music. But then he couldn't read it because it was too small. So I enlarged it on the photocopier, taped it all back together, mounted it on giant pieces of cardboard, and stuck it on the piano. As soon as he finds it he will probably start trying to learn it. If he hurries, he'll have it memorized in time for the holiday season. 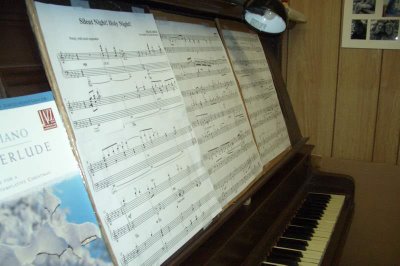 Today Gary got a letter congratulating him on his appointment as Adjunct Professor of Applied Linguistics. We think that is a promotion from his previous appointment of Adjunct Associate Professor. However, just so there is no confusion, the next paragraph read: This appointment is unsalaried and non-tenure-earning.

Fortunately, we did not join up because it was going to make us rich!
Posted by Thainamu at 4:48 PM 3 comments:

Just when you thought I could come up with no more useless things to post about, today I'm talking about dryer lint.

And apparently I'm not the only one. If you google "dryer lint" you will find such things as an official dryer lint webpage, ideas for using lint in craft projects, a website that looks like a science fair project on dryer lint, and even dryer lint pets.

But today the point is to thank the Lord for protecting us from a dryer fire. We did have a small dryer fire a few years ago, so since then I have tried to be more careful about cleaning out the dryer vent hose. Today I decided to try venting the warm, humid air into the house while I dried the clothes (don't try this if you have a gas dryer). When I disattached the hose I jiggled loose a large amount of dryer lint that was apparently being held inside the dryer with a bunch of toothpicks (these must come from Gary's clothes, since he carries them around). I was amazed at home much lint blew out of the dryer and I realized that it could have easily caught on fire.
Posted by Thainamu at 4:32 PM No comments: