She Can See Clearly Now

Amazing! That piece of glass I ordered from somewhere in Kansas arrived at my doorstep in less than 24 hours! Unbroken! I was tempted by Ma Hoyt's comment yesterday to try to install it myself, and indeed I started the process. But Rachel objected, wisely so, when the insides of the door looked just a bit too complicated. I had gotten as far as taking the door panel apart and vacuuming up the rest of the glass inside the cavity. Rachel called a couple places and found someone only two miles away to install it for $50 cash, so she took it in. An hour later, she has a new door glass. 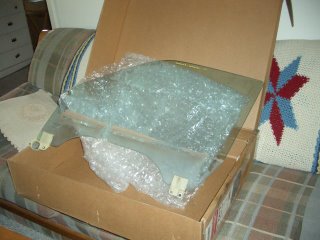 It was nice of the LORDSKNIGHT to volunteer to "return the favor," but hopefully his sense of chivalry will be subdued now that her car is again operational.

I should also say thanks to Marlon for giving us a lesson on how to use the tire guage and air compressor. Now her tires have more than 12 psi! The brakes are pretty squeaky, but maybe that problem can be solved next week.
Posted by Thainamu at 5:18 PM No comments:

I spent an hour at the optician office yesterday trying to get Gary's desperately needed reading glasses repaired, but with no luck. So I cannibalized another pair of reading glasses to fix them, at least temporarily. 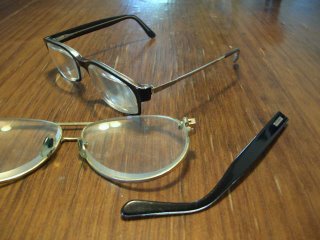 Then there was the broken pane of glass in R's apartment, which, ironically was broken by a lovely stained glass cat as its chain broke and it fell. 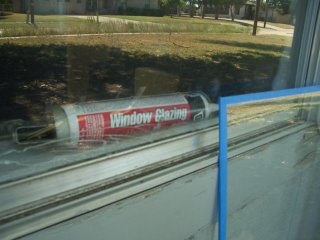 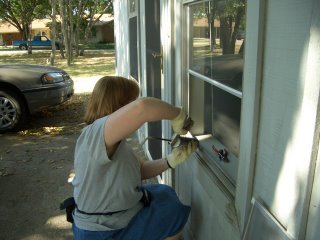 Then there is the broken window in Rachel's car. We tried to get one at a junkyard, but no luck there. But one of the junkyard dealers told us to try the internet. I typed in the search criteria to a generic used car parts site, and within 5 minutes or so I had 10 emails from around the country saying they had it. So I called one place in Kansas and they said they would get it here in 1-2 days! If that really works, I'll have to find someone to install it.
Posted by Thainamu at 3:41 PM 2 comments: 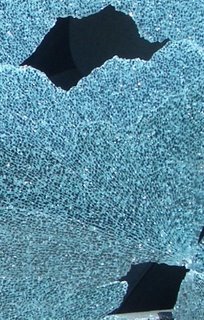 But this time the damage can be repaired with just time and money. 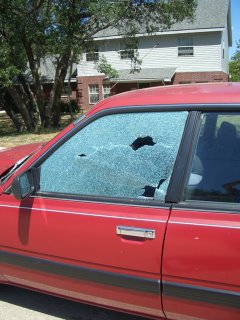 When we got home from church Sunday afternoon, we found someone had shot out a window on Rachel's car. There were two other BB indentations on the car too. 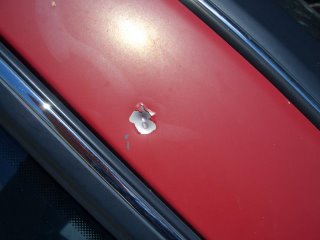 We cleaned up the glass in 105 degree heat. Have you ever vacuumed your street before? Neither had I. Then we walked around the neighborhood, and when I found that the neighbor's van window had also been hit, I took this accidentally artistic photo of it. 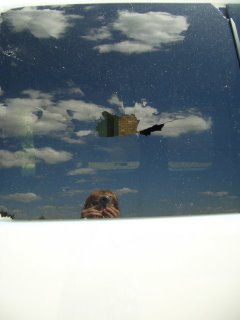 Rachel called a couple places and found it was going to be close to $200 to buy new glass, so the man who sold her the car suggested his favorite junkyard. That sounds like a good idea except who wants to send their daughter to a junkyard??
Posted by Thainamu at 2:19 PM 1 comment: