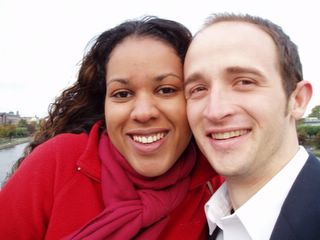 This evening we got a phone call from Andrew. He was calling from the Dominican Republic and it sounded like there was a fiesta going on in the background. He had gone to Santo Domingo a day earlier than his girlfriend expected to make his de facto engagement official.

As far as I understand the story it went like this: Andrew schemed with Laura's best friend, Nicole, to come to DR a day early. Nicole had helped Andrew to reserve a restaurant on the beach (sand floor 10 feet from the ocean) where he littered the floor with rose petals and parked himself on one knee to await Laura's arrival. Nicole then cooked up some plan and managed to get Laura to the restaurant. Nicole said she needed to go to the ladies' room and told Laura to go on in and find a table. At which time she found Andrew down on his knee with a diamond in his hand.

So now he has met Laura's mom, who only speaks Spanish. Lucky for him, he speaks passable Spanish. He has also met her sister and aunts and some of her old friends. He says they all like him, but as Laura says, "He's very likeable." :-)

Andrew apologized ahead of time for not being able to phone me on Mother's Day, but he said, "I'm getting you a new daughter for Mother's Day instead."

The wedding is August 5 in Santo Domingo. I've already bought our tickets. This engagement was dramatic, but it wasn't unexpected. Pray with us that God will be leading Andrew and Laura into a strong marriage that honors the Lord.
Posted by Thainamu at 9:38 PM No comments: 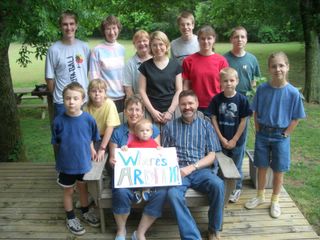 Last night we had a visit from a family I met on line. Apparenly no ax-murderers in this bunch, just a lot of nice kids! They got to try fajitas for the first time, and seemed to enjoy them--except I did notice someone eating them with a fork!
Posted by Thainamu at 8:10 AM No comments:

I've been thinking about arguing for a couple days, trying to analyze what is involved in arguing, trying to figure out why and how people argue. (The anecdotes presented here are about actual people I know, but the actual people I'm thinking of may be of a different gender than the pronoun I'm using indicates. I don't want to be too obvious.)

1. I know someone who likes to argue. I mean, he argues because it is fun for him. He is very intelligent, and finds arguing to be mentally stimulating. He has admitted to strongly arguing one side of an issue, like he really believed it, then immediately turn around and just as strongly argue the opposite side. His interpersonal skills are not the best in the world, and sometimes his arguing for fun does hurt other people's feelings. But he doesn't really feel so bad about that, since his motives were not to hurt them, just to explore all sides of an issue.

2. I know someone else who doesn't really like to argue, but does it as a way to force interaction with an introverted spouse. This couple actually doesn't have any big issues to debate, but she tends to become engrossed in work and/or other projects and unintentionally ignores him, in spite of the undying love between them. So he picks a fight--and since she doesn't like conflict, she will immediately pay attention and start talking. Arguing does make them talk, but it would be nice if there were a better way.

3. I know someone who argues out of self defense. This person is an emotional person, and if his feelings are in the least way ruffled, he becomes argumentative. His arguments may or may not have a basis in logical fact, because indeed, they proceed from feelings, not facts. It seems like if he is happy and secure, he doesn't argue. If he becomes afraid or insecure for some reason, he starts to argue as a way to protect himself.
Posted by Thainamu at 2:31 PM No comments:

He metes out his time,
thinking if he gave it freely,
it would soon run out.
So she accepts the measured droplets,
while longing for a flood.

Posted by Thainamu at 1:54 PM No comments:

In recognition of May Day I have updated the wildflowers photo page on my stale website to include photos of 6 more species of wildflowers that I have recently identified. I'm always amazed at the variety God came up with when he created our world.
Posted by Thainamu at 9:34 PM No comments: