Tonight we're having our first Christmas meal with friends. I haven't had time to make all my Christmas goodies yet, so this will be her Christmas present. The vase is a small "flower arranger" that my mother-in-law made. She's a potter and I love to give her creations as gifts. 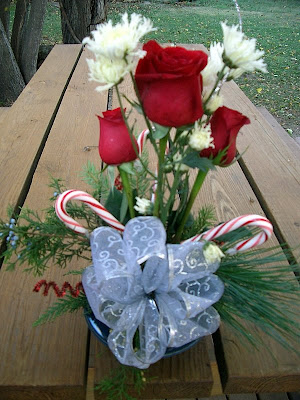 Tomorrow afternoon we're driving to Grandbury, a cool little town an hour or so south of here, and will spend the evening there with three other couples with whom we used to be in a Bible Study. We don't get to see them often, so it will be nice to have a little Christmas party with them. 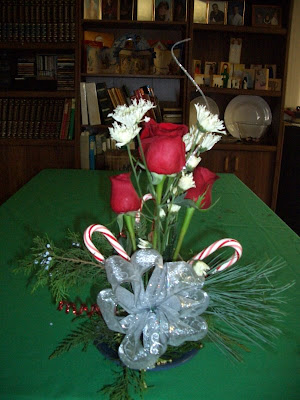 I'm taking them flower arrangers too, and we'll have a craft project to make flower arrangements--like this one, only better! I've bought the flowers, greenery, and candy canes and pulled out my corsage making kit from when I used it at David and Sarah's wedding last June. Good thing I did that, because I found the missing pair of needle-nosed pliers I'd been looking for.
Posted by Thainamu at 4:30 PM No comments:

A lot of today was spent talking and thinking about potties. No, no one has either diarrhea or constipation--this talk was about the replacement potties. Ya know, it aint that easy to pick them out!

I even got a phone call from the City of Dallas today about potties! They told me my voucher was on hold until I faxed them a copy of our water bill. I'll do that from the office tomorrow morning.

The contractor came today and we showed him our four drawings of possible floor plans. After getting his opinion, we have come up with a plan. The plan will include extensive plumbing issues, but he felt the plan was entirely workable and we think it will give us a very functional end result.

We've decided to rip the wall out between the two bathrooms, move both toilets, change both sinks, and put in new tub/shower combination in BOTH bathrooms. This is only barely possible in such a small space, but it is possible because we are moving the master bathroom sink into the bedroom. So technically the bath off the master bedroom will be a "three-quarters" bathroom, not a full bathroom. But there are many examples of dorm rooms, hotel rooms and even Rachel's apartment where the shower and toilet are together and the sink is in the main room.

So, if anyone wants to know what to get us for Christmas, Home Depot gift cards come to mind...
Posted by Thainamu at 7:03 PM 1 comment:

Did I mention that I filled up the van this weekend at $1.58/gal? *little dance*
Posted by Thainamu at 10:27 PM No comments: