Then one day he began to notice that no one every talked to him except when they had a problem. He noticed they never called to chat or asked how he was. They never suggested he join them for dinner and a movie. The man began to wonder if his usefulness was the only reason people liked him. He wondered if anyone liked him because he was kind, or nice, or just because they should. He began to wonder if they liked him only because he fixed things for cheap or rescued people from emergencies. 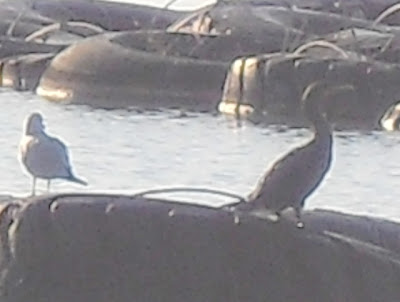 OK, it is a horrible photo, but it is proof that I saw this bird at Joe Pool Lake today. It was sitting on a line of tires that they use as a breakwater near the harbor. (It is the one on the right, in case it is so bad that you can't tell the gull from the cormorant!) I got Gary to go to the park with me after after finishing the plumbing project at Rachel's house and after the Cowboys' humiliating loss. It was the first day of nice warm and sunny weather we've had in some time.
Posted by Thainamu at 6:33 PM No comments: