A Short Trip to Houston 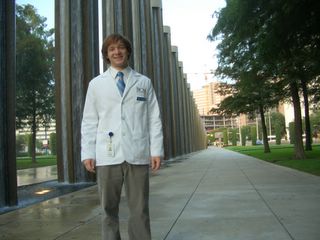 It takes 4.5 hours to drive to Houston, about an hour more than it used to take on our trips to OKC. We got there yesterday afternoon in time for a trip to Super Target to buy David a bunch of "getting settled" stuff for his new home--mostly food, and some housewares too. Then we rushed off to his White Coat Ceremony where he recited an oath with his 160 fellow students and then donned his new "short" white coat. During the evening I learned the difference between a short white coat and a long one. Rachel leaned what "don" means. Gary learned what Command strips are. David learned where the auditorium is. A very educational weekend for us all.

After the ceremony we went again to Super Target and bought a bunch more stuff. We didn't stay up late as we were all too tired after spending all that money and smiling for all those photos. Gary and I slept on a blow-up bed on the floor in the living room--not bad, but some air did leak out during the night.

Then we were off again for Family Day: a fancy breakfast, several short lectures about med school, an anatomy demo, and then a fancy lunch. Then another long drive home, but we made it home by 7pm.

David has a long stretch ahead of him in Houston, at least 7-8 years. Pray with us that he will get settled soon, find some friends, do a good job with his studies, and find a church soon.
Posted by Thainamu at 8:40 PM No comments:

It seems we must have brought some little bug home with us from our trip. First Rachel was sick, then a day and a half later, I started feeling lousy. Then we got an email from Grandma and Grandpa saying they had it--flu symptoms, listlessness, and some fever.

Yesterday I discovered that our phone service had been disconnected! It took some searching of my memory, but then I realized that the problem stemmed from the time our credit card was suspended by our bank due to a security risk, and apparently my call to the phone's customer service folks in early July didn't quite do the trick. So this morning I used Rachel's cell phone to call them and pay the bill for June (the bill for July had already been paid). A few hours later the phone was working again.

Tomorrow we are looking forward to going to Houston to see David's new condo and then attend his white coat ceremony and Family Day to celebrate his start of medical school. We are trying to pull together some used furniture, housewares, and food to take to him as a housewarming gift.

When I was at the warehouse looking for free used furniture for him, I found a "new" couch for us. Today I removed the cushion covers and washed them and mended a few holes. Now I have a new old couch which is in a bit better condition than my old old couch.

I also am proud to report that yesterday I installed a new cut off-valve and inlet pipe for the toilet in the apartment, and, believe it or not, no leaks!! I couldn't have done it without first getting detailed advice from the salesman at Home Depot.
Posted by Thainamu at 6:47 PM No comments:

Dancing is not a skill I grew up with, but there were plenty of opportunities to learn on our trip. 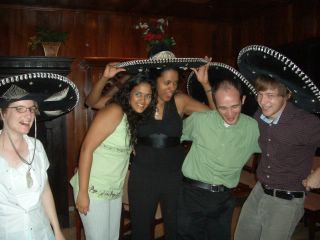 Mariachi at the rehearsal dinner. 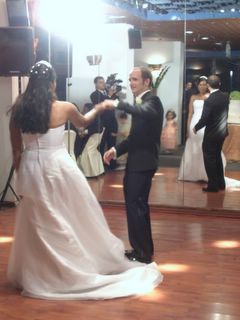 First dance by the new couple. 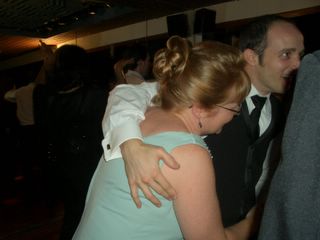 I even got dragged into trying. 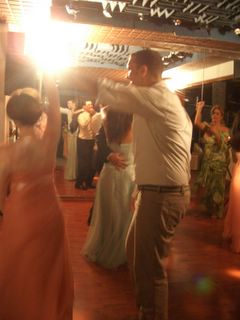 Some random guy gave Rachel a twirl around. 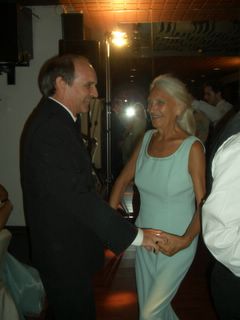 Grandma Judy remembered how to do the jitterbug.
Posted by Thainamu at 2:23 PM 1 comment: 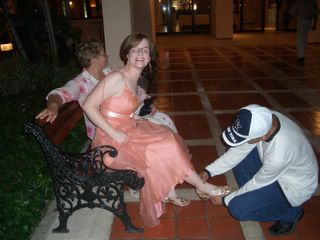 Many things did not go as planned during our trip to the DR, some were funny and others weren't. Rachel's golden slipper broke while we were at the country club a hour before the ceremony. There was a very helpful young man there who nailed it back together and even put it back on her little foot.
Posted by Thainamu at 8:26 AM 2 comments: 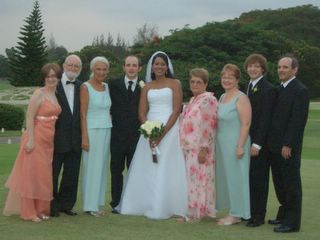 We arrived home at midnight last night (1am by body time) from our week in the Dominican Republic. It was quite an experience--with many language and culture challenges for us, to say nothing of the feeling that we were taking your life in your hands every time we went somewhere by road.

The bride was even more beautiful than she normally is, the bridesmaids were lovely, Andrew had many of his college and grad school friends attend, and the wedding started only 7 minutes late. (This, actually, was a miracle, but I won't go into that just now.:-) The reception was top rate, if a bit more fiesta than our deadpan family is used to.

Pray with us that Andrew and Laura will put the Lord first in their life together, as they will face even more challenges than a "normal" couple with a cross-cultural marriage and living in yet a different culture in Ethiopia.
Posted by Thainamu at 3:49 PM 2 comments: