Tonight we attended a talent show at church. Most of the acts were cute or funny, and we really do have some talented people there. But the song that I came home with was performed by three sweet pre-teenage girls, whose voices have not really fully developed yet, but their presentation of this particular song was poignant. They were all wearing red shirts that weren't too tight.

They're saying
Don't ask why just wear what we say
You'll look like a model if you'll only obey
To get the attention, just do what we say

Pay so much for clothes so small
Was that shirt made for me or my doll?
Is this all I get?
I looked so hot but caught a cold
I was doing just what I was told
To fit in

Clothes that fit are fine
Won't show what's mine
Don't change my mind
I'll be fine
Posted by Thainamu at 10:32 PM No comments: 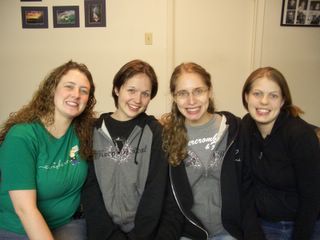 Last night we had these four lovely ladies come to stay with us for four days. They are interns with Teen Mania, a Christian group that sends young people out on short term mission trips. They are in Dallas this weekend for an event called Acquire the Fire which is a weekend-long event including Christian bands, speakers, and corporate worship. In a loud way.

The MKs in our community attend most every year and several of them go on the summer trips. Our daughter took one of these summer trips to Venezuela while she was in HS.

I wondered if our facilities were adequate for these girls, but after they told me they actually live on a tour bus, I decided our place must seem palatial. We are to provide a place for them to sleep and breakfast in the morning. Turns out they needed a washing machine and internet access too, but we've got plenty of that too.

Today I got a call saying a 5th girl may be joining them tonight.

Note to any of my young gentlemen readers: No, you may not come and "visit Aunt Linda" while they are here.
Posted by Thainamu at 3:36 PM 4 comments:

If my son would answer his phone, read his email, or even read this blog, he would learn that he has been invited to spend his 21st birthday at a certain M.D./Ph.D. program's candidate review, all expenses paid. Way to go, David!
Posted by Thainamu at 1:55 PM No comments:

Today I realized that all the time I've wasted making a personal website, blogging, and talking on a forum have actually taught me some new skills that I needed for my job. Or more to the point, since I learned these new skills, now my boss is giving me new responsibilities.

There are three secretaries in my office, and all three of us are helping to organize logistics for a set of meetings attended by about 30 of our members from around the globe. I've done this kind of thing in the past, and it usually includes finding housing, picking people up from the airport, buying food for coffee breaks, gathering together office supplies, printing and collating paper materials for the meetings. These meetings were no different, except now all the materials are also being kept on a special website. My job is to upload files to this site from anyone in the group. And then tomorrow when they come in with a new version of a document, I have to upload the new one and get rid of the old one.

With these new skills and responsibilities, I'm tempted to try to skip out on the really important work: making coffee.
Posted by Thainamu at 3:32 PM 1 comment: 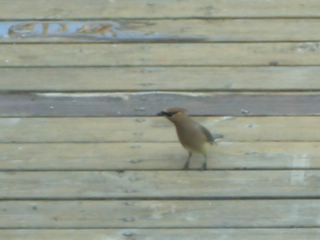 I think this is only the second or third time I've seen Cedar Waxwings in my backyard. Today one got close enough to take a photo (yeah, I know the photo isn't great). I had watered the hibiscus bush, and the birds came to drink up the water on the deck.
Posted by Thainamu at 4:56 PM No comments:

David phoned me at work this morning. I'd rather he call me when I am not busy and have plenty of time to chat, but I've learned to just take what I can get from him. He has picked up a habit from his older brother--"phone mom while I'm walking from A to B, since I have nothing else to do." Andrew used to often do this while hiking across Harvard. David phoned me as he was on his way to the Metro station. He was off work today, it being a holiday for government employees. He was going to the National Archives to see the
Emancipation Proclamation which was on its last day of being exhibited to the public.

I passed on to him that one of his old girlfriends was wondering why he hadn't answered an email she wrote three weeks ago. "Oh, yeah, I was going to." Then I told him, "Rachel says, 'boys are stupid.'" "No, she's got it wrong--girls are stupid" he replied. Well, which is it?

I talked to Rachel last night which is when she told me that she had been IMming with David's old girlfriend and they had come to the conclusion that boys are stupid. But she wasn't crying when she said it, so it must have been an intellectual assessment, not an emotional one:-)

I'm still praying for her and her student teaching and I know others are too. Her student teaching is going pretty well, but at times it is overwhelming. It is making her rethink if she really wants to be a teacher. Tonight she also has a big exam in her Monday night class. I don't know if she'll have time to talk to me tonight as she will probably be exhausted.

Andrew made it back safely to Ethiopia. While in Kenya he bought some kind of Kenyan chip for his cell phone so he could use it there, then switched back to the Ethiopian one when he got back home. He asked for prayer for some decisions that Samaritan's Purse must make about working in the country.
Posted by Thainamu at 7:07 PM 7 comments: 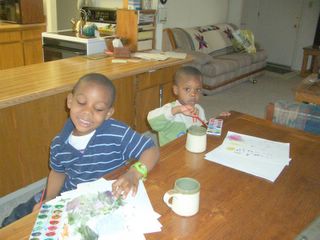 My nest is empty, but these two young friends come over almost every day to play. When it is time to go home, they won't leave until I give them cookies, pretzels, and raisins. I'm such a pushover.
Posted by Thainamu at 4:34 PM No comments: