David came home for the weekend so we could celebrate with him. We took him to Ton's and we took him to Beauty and the Beast and made cheesecake and Italian Cream Cake.
Posted by Thainamu at 11:58 PM 4 comments:

..ended better than it began. On Tuesday she had a job interview that she felt went well, but she hasn't heard anything yet. Wednesday through Friday she had full days of teaching these four kids whose parents were attending a conference. I was truely amazed at how well she organized all the activities, and how much the kids seemed to enjoy it. 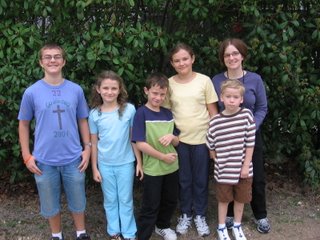 14-year old Jeremy was a big help too. 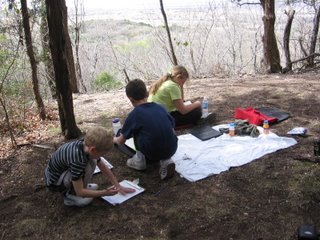 Today she took them on a nature walk. 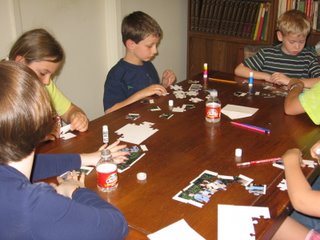 Then made puzzles from a group photo. 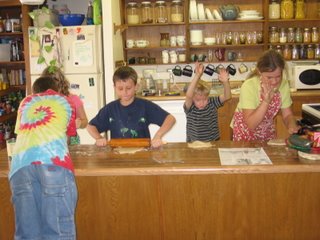 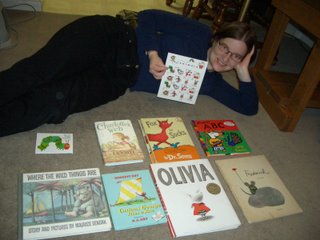 Then after she dragged herself home she looked up on the internet and found out that she had passed the last Texas teacher test--yay! I had been saving this gift for her till she passed--a set of stamps about children's books and the books to go with the stamps.
Posted by Thainamu at 11:36 PM 1 comment: 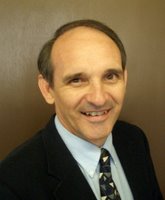 All the academics at SIL are trying to get their professional websites updated. The webmistress was complaining that Gary's didn't have a photo, and Gary was complaining that all the photos we did have looked bad. So at lunch I told him to stop complaining and go put a shirt and tie on and we'd make our own "professional" photo. It isn't all that great, but it is the best out of the 20 we took. Ain't monopoly film great??

I'm thinking it might be time to shave the top of his head. What do you think?
Posted by Thainamu at 11:09 PM 1 comment:

Rachel's boyfriend broke up with her last night. No fight, just a quiet, "this isn't working and I don't think it ever will." He was kind enough to talk with me about it too, which I know wasn't easy for him, and which I appreciate.

I had suspected this might happen, so I wasn't exactly surprised. I'm not angry, but I am sad. I will continue to pray that God will bring the right woman to him at the right time--the same thing I've been praying for three and a half years.

Needless to say, Rachel's heart is broken. She had been convinced for some time that he was the one she would marry. Besides her emotions, she will have two other things to deal with. First, it will be hard for her to face the fact that she thought she heard God's voice in wanting to marry him, but apparently she didn't. Something like that could shake one's faith.

Second, in some ways the worst part of this for Rachel will be losing her best friend, because he was that as well as her boyfriend. But they have tried the "let's just be friends" route in the past without much success, so I have asked them not to do that again. I fear they will just find themselves back in the same situation if they spend time together as friends: attracted to each other, but he unwilling to marry her. I don't want her to go on that emotional roller coaster again, so I've asked him not to see her again unless he wants to marry her.

Even so, they will need to come to some kind of understanding about their lost relationship, and they will need God's grace and wisdom as they move on with their lives.

If I were allowed to arrange marriages, I would have arranged for him to marry Rachel. I always thought the two of them fit together pretty well (though not perfectly). And--no offense to either one of them--they are both somewhat odd ducks who seemed to be able to accept the other's eccentricies.

The only negative thing I have to say about his treatment of Rachel comes from the fact that, indeed, he never loved her: he was generous with her in all ways except with his time. It was sad to me to see him doling out his time to her in measured drops, when I felt she deserved to be flooded. I guess that is how he will one day know he has found the right girl--he will want to always be with her.

Let me end by saying that I appreciate the kind and gentle way he always treated Rachel, even if he never loved her.

I'm blocking public comments, but you can email me at thainamu at gmail.com if you have anything to say.
Posted by Thainamu at 9:07 PM No comments: 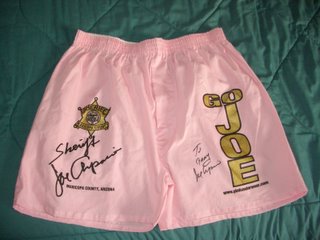 We're not quite sure why Gary got these for his birthday. We'll have to ask his mom. :-)

I spent some time this past weekend adding two new sets of photos to my website--one of Gary's recent trip to Bremen, Germany and the other of David's trip to Ethiopia last Christmas. Unfortunately, the space I am allotted for my website on Comcast is full, so every time I want to add new photos, I have to take off some of the older ones, which is a bummer. I also updated a few things on David's page. I need to update several other things.

Rachel has a 3-day job this week taking care of 4 kids whose parents are at the Center for a conference. She is busy, busy preparing lesson plans, craft projects, and a fun nature hike. The pay is pretty good, but it is taking her hours of preparation ahead of time, so that makes up for it. Tomorrow she will volunteer at the Center childcare too, then lead the lesson on James at her singles' group, so she has lots to do this week. We are still praying for her to find a real job.
Posted by Thainamu at 3:04 PM No comments:

How and What to Pray

I didn't go to church today, because I'm sick. Well, I am probably not so sick that I had to stay home, but I didn't think I should work my shift in the nursery, and I didn't want to listen to people say, "Oh, you sound so bad, you should be home in bed." I am feeling better than a couple days ago.

I've been wondering how to pray for the people I love. It seems like I'm not smart enough to know how to pray specifically. I mean, I could be tempted to pray for a certain specific thing or another, but what if that thing isn't what God wants? After all, I'm not omniscient, I don't really know what specific things God wants for a given person.

Instead, I'm looking at God's Word, and finding things from scripture, things I can pray for myself and for others that I know can't possibly be the wrong thing to ask for. I'm using the 1st person singular pronoun here, but it could also be 3rd person.