Well, another work week is coming to an end. We had a house guest Monday afternoon through Friday early morning, but she's an old friend who basically takes care of herself, so she was no trouble.

Rachel has started looking for a real job, but it doesn't seem like she's gotten very far. She applied for a teacher's aide job at one of the public schools, and filled in a general application on a teacher website. She's now starting to look at local private schools and preschools.

Gary had a work visitor here for two days, who is also a friend, and he will head out for home (Toronto) soon. Besides taking us out to eat at Ton's Mongolian BBQ last night, he brought us a couple nice gifts--now I just need to make waffles.

I just phoned David, he's on his way to Dallas from Houston, after taking exams this morning. He is only here a couple days before leaving for Ethiopia on Tuesday. It will be odd with two out of three kids away for Christmas; I guess this is just another sign of getting old.

We continue to have heating issues. A few blogs ago I told about getting a new gas tank. Apparently the pressure in the new one is different than the old one, and the new, expensive furnace is having trouble coping. A technician was here two hours yesterday afternoon, and now they're here again at the moment. It is cold here, but not life-threatening cold.

Our Sunday school class is having a Christmas party tonight. On Sunday morning the church choir, of which Gary and Rachel are members, will put on a special program. After that we have plans to go to Panera Bread for lunch, then have our "family Christmas" before David leaves. Seems way too early to be opening gifts, but it doesn't look like there will be too many to open anyway. As Gary says, "Those kids are getting too big for Christmas."

He sounds like a scrooge sometimes, but he will happily acknowledge that our anniversary is also Dec 25--30 years' worth.
Posted by Thainamu at 3:13 PM 1 comment:

You Read it Here First

Today the New York Times finally caught up with me. (Here's a link to the same article in a paper you don't have to register to read.)
Posted by Thainamu at 5:36 PM No comments: 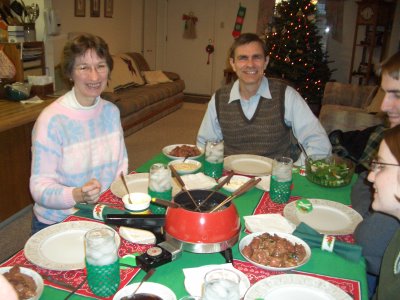 Last night we had a fun little dinner party featuring a blast from the past--anybody remember fondue? This was the oil type (as opposed to cheese or chocolate) where each person cooks their own pieces of marinated beef, then dips them in various sauces before eating. We also fondued red potatoes (partially precooked) and they were good too. Martha brought a salad and we also had the rest of the rolls I bought at the church bake sale. 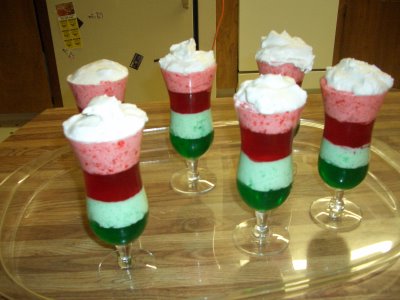 The Christmas Jello for dessert was Rachel's idea, which isn't to say that she actually made it. But really, she couldn't, because she was busy taking her Texas teacher test yesterday. This dinner, and watching the Narnia movie afterwards, was to celebrate Rachel finishing this test. It will be a couple weeks before she finds out her results.
Posted by Thainamu at 3:55 PM 1 comment: