No, I'm no good at movie reviews, so I'll just say: I liked it. We went on a triple date of sorts to go watch the End of the Spear movie at a local theater. There were also lots of folks from my work and my church there.

I wore my Waorani necklace as did most of the men in the movie.

The following is a prepared blurb about a memorial service held Jan. 8, 2006.

...a 3 day memorial service was held on Palm Beach in Ecuador commemorating the death of the 5 missionaries. Some 200+ Waodani and visitors participated - among them people from: Wycliffe, MAF, HCJB and Christians in Many Lands. Brothers of Jim Elliott and Pete Flemming attended the service. Wycliffe members Don Johnson and Bub Borman also attended the celebration. (Don and Bub had been in Ecuador in 1956 and had joined the team that retrieved the bodies.) Jim Yost, former Wycliffe Anthropology Coordinator and member of the Waodani field team, was also there by invitation of the Waodani. There were 10 Waodani baptized at the event last weekend.

I hope the movie is shown outside of the Bible Belt and that you all get a chance to see it.
Posted by Thainamu at 11:14 PM No comments: 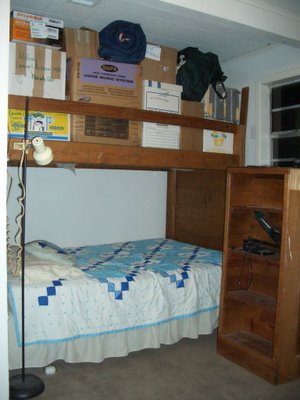 Last night Gary and I reassembled the old bunk bed and turned it into a storage loft for holding all of Andrew and Laura's stuff. Underneath the loft fits a double bed for visitors, and with this new compact arrangement, there is now even space in the room to turn around.

I know there are many hundreds of pounds of stuff on that loft, but Gary assures me it is plenty sturdy and safe.

Eventually, this room may become part of a rented apartment, as it was years ago years ago when the kids were little. But for now, we still have space for visitors.
Posted by Thainamu at 7:55 PM 2 comments: 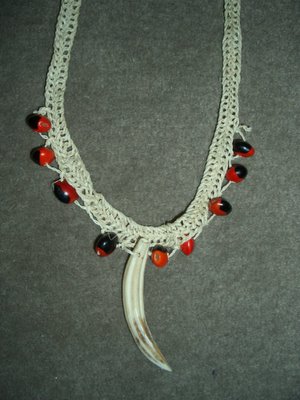 Several months ago Gary and his boss were in Orlando on business and Mart Green gave them a ride to the airport. Besides a ride to the airport, Mart gave both men a necklace (which they wore over their dress shirts and made it through airport security with no problem). Gary told me at the time the necklace was from the Waorani tribe in Ecuador, but I didn't pay much attention.

With the opening of the End of the Spear movie this coming weekend, I was reminded of this necklace, so I wore it to work today. My plan was to ask my coworker, who did literacy work with the Waorani, if the necklace was for real. Turns out I didn't even have time to ask--she came up to me and said, "I like your necklace." She went on to tell me that the string was made from a palm frond, the seeds were from a different palm and were naturally that color, and the ornament was a tusk from a white-lipped peccary.
Posted by Thainamu at 1:18 PM 1 comment:

End of the Spear 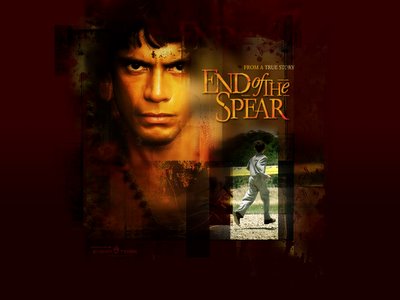 At church today we skipped Sunday School and watched a 30 minute "how the movie was made" movie about The End of the Spear. It was filmed in Panama, with indians from the Northern Emberá language group. It was logistically impossible to film it in the
Waorani area, but there were Waoranis there to teach the actors how to act like Waorani and to get the makeup right.

The most interesting thing I heard this morning was when Steve Saint, son of one of the slain missionaries, first asked the Waorani for permission to make this movie, they said no. Then Steve was able to persuade them to change their minds after telling them about Columbine. “Oh, that's just like how we used to act, killing for no reason,” they said, and then gave permission. (This society was one of the most warlike societies known to anthropology, with a homicide rate exceeding 60 percent as a result of warfare and raiding.)

So far, I've only found one theater that will be showing it this coming weekend, but I hope to get some friends together and go.
Posted by Thainamu at 10:46 PM 2 comments: