There were three or four hundred of us, I guess. Mostly dressed in the boutique's best, not much to look at. Lots of white hair, but a few babies too. Mostly married folks, but a few singles too. The pews were piled higher and deeper with advanced degrees. The best part was we sound great as a choir in the round. At one point, the song leader said, "We're going to sing a song in Mboke. It will be new to most of you." So we sang 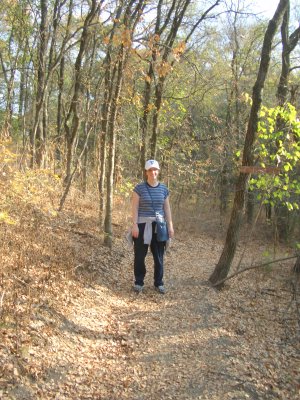 I didn't return to the meeting after lunch. Instead, Rachel and I went for a hike on the MK Trace. It really isn't that beautiful of a place, but in Dallas, we can't be too fussy. 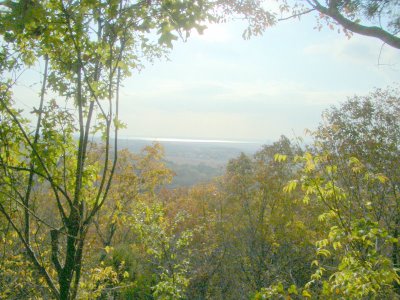 And at the highest spot, there is a nice view of Joe Pool lake. 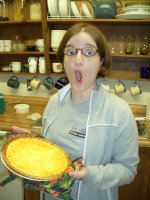 Rachel had no plans tonight, so we decided it was time for another cooking lesson. She made quiche, spilling only a little in the bottom of the oven. I'm not sure, but I think she might be calling me an oaf. 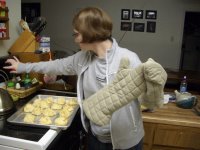 And she's been wanting to try making cheese biscuits since having them at Red Lobster.
Posted by Thainamu at 9:28 PM No comments: 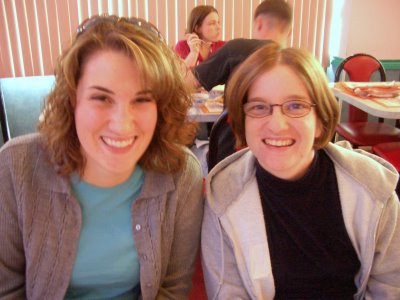 Today we had lunch at my favorite place, (Ton's) with Stella and her mom to say farewell to Stella who is taking a job at Methodist Children's Home in Waco, TX. We want to wish Stella the best as she starts a job as Youth Care Counselor. Our prayers will be with her in what will no doubt be a challenging job.
Posted by Thainamu at 3:26 PM No comments:

No, not for me, for grandma. My mom phoned last night and asked me to buy her a new computer. "Buy it" in the sense that I would order it, but with her credit card. So I did. In a couple days, she should be the proud new owner of a Dell Desktop with a flat panel monitor. Rachel's comment: "Yay, a new computer to play games on at Christmas."
Posted by Thainamu at 6:47 PM No comments:

Have you ever been to a professional baseball game where the fans did the wave? You know, a rowdy bunch in the outfield bleachers gets bored with the game so they get all the folks in that section to stand up, wave their arms, and yell. Then just as they are finishing, the next section does the same thing, and so on. If the fans are willing, this process can go all the way around the stadium, and then start again. It is fun to watch this phenomenon, and fun to participate in too.

I started thinking about the wave in church today. No, I wasn't daydreaming about baseball. the song we were singing, He Reigns, got me to thinking how believers all around the globe raise their hands and voices in praise to our savior every Sunday morning.